It has been a long and lazy Christmas break for me, with two weeks at home in Glasgow doing nothing apart from drinking gin and taking the dog for walks. However, I am now back in London and in real life again, and ready to atone for my abandonment of writing, life admin and looking or thinking about anything to do with art. I’m going to start ‘Sertraline Dreams’ 2019 softly by musing a little on remakes, re-adaptations and film failures in the specific case of Suspiria, comparing and contrasting the cult horror classic of 1977 with the new 2018 version.

I saw the new Suspiria at the Rio Cinema last November (still my favoured cinema in London) after previously seeing the advert when there watching Mandy. I hadn’t heard of the original film but was immediately captivated by firstly, Tilda Swinton, and then the Pina Bausch-esque experimental dance/choreography used in the trailer to illustrate the uncanny, dream-like, supernatural atmosphere. The female bodies, twitching and writhing in unison clad in otherworldly costumes, cleverly evoked the dread, anticipation, tenderness and violence between the characters in their claustrophobic, suspenseful narrative. So immediately I decided this was something I was into, and viewed the film at the first opportunity.

And really the trailer was probably the best bit of the whole 2018 Suspiria experience. The vital atmosphere so effectively conveyed was taken apart moment by moment in the full film, in a process of over-explanation, unnecessary characters and sub-plots, and an insistence on giving a history lesson on 1970s divided Cold War Berlin that is not why anyone would ever go and see a film about a witches’ coven set in an all-female contemporary dance school. Worst of all, it was TWO AND A HALF HOURS LONG. No film should ever be more than two hours, ideally 90 minutes (which is the running time of the original).

The special effects were technically impressive, used for gory, violent and protracted scenes such as the horrible demise of poor Olga, forced to dance to death with bones snapping and punctured organs, trapped in a mirrored studio. Like most of the other scenes in the movie, while the idea and execution was very slickly executed, the sheer length and clinical examination of the imagery managed to kill off any fear or emotion that can be evoked with a minimum of fancy effects and edgy camera angles. In any horror movie, the monster loses its power the moment you see it clearly, as the fear comes from your own imagination, and once that is taken away and explained visually, the film falls flat unless it metamorphosises into something else. This is why most of the best horror films (The Blair Witch Project for example) feature malevolent forces that remain unseen. The new Suspiria does not in any way accept this rule.

So much of the new Suspiria was unnecessary: the script took the original story and fleshed out every single gap to bursting so that there was absolutely no mystery left, like installing floodlights in a shadowy attic. Tilda Swinton played a second role as an elderly male psychologist which was an undisguised gimmick (as if a film about dancing Berlin witches needed such a huge joke) while she was already resplendent as Madame Blanc, the leader of the dance troupe. Everything to do with the Cold War I could do without, as a film about bizarre dancing murderous witches can’t really ever say anything very intelligent about divided Berlin. Essentially, I agree with the Guardian film critic Peter Bradshaw who said in his review that somewhere in Suspiria 2018 there is a great, atmospheric, beautiful film, with many wonderful things that builds well upon the original, which I will elaborate on later, but in order to be that great film, so much needs to be cut away.

I watched the original Suspiria during my Christmas holidays (my mum got me the DVD as a present), and I was surprised at the extent that the original differed from the remake, and how much content had been inserted. Suspiria 1977 is a dream-like, wandering narrative, drenched with neon colour and punctuated with lashings of glorious tomato soup blood; it does not attempt to construct a full world, rationalise its magic, flesh out its characters. Instead it uses light, colour – it was one of the last movies shot in technicolour, which is triumphantly beautiful – and its iconic soundtrack by Goblin to create an environment that by shadowy implication has its own interior logic, stimulating the viewer’s imagination, emotion and desire; simple and effective. The sheer simplicity of the film is masterful; though for a film set in a dance school it has hardly any dancing which I think is a shame, and the plot is very, very thin indeed. But it never pretends to be anything other than a gleeful feast for the senses, with the female characters transported by hypnotic trances, their bodies swept away in dance, torn between rationality and nightmare. The word ‘suspiria’ kind of comes from the Latin for ‘sighs from the deep’, which is the best way to read the film: a whisper from the heart, a visceral howl escaping from a dark world of desire, sexuality, fantasy; from the unconscious, the animal part of ourselves.

The remake builds on this foundation, and there are some fantastic things that the 2018 version adds that I did miss from the original. The first, is the decision to make the dance school all-female; an impossibility in 1977, which has a dopey love interest shoe-horned in. This also allows for some homo-erotic tension specifically between Dakota Johnsson’s Suzie and Madame Blanc, which is always a good thing in my book.

Secondly, the dance in the new version is fabulous; there is lots of it, the choreography is at the forefront of the film and not an afterthought as in the original; and the dancing expresses so much towards the plot and the world of the film; dance provides the initial motivation of the characters. It was also genius to pair the 1970s dance school with the choreography resonant of the work of Pina Bausch, legendary German choreographer, creator of the Tanztheater Wuppertal Pina Bausch, international icon of modern dance. This pairing was screaming out to be made; Bausch’s eery, suspenseful, abstracted experimental movements perfectly match the beautiful/terrifying duality of the dance school setting. Also, Tilda Swinton’s perfect Madame Blanc just has to be based on Pina Bausch, as the pictures below clearly show. It’s a great reference and it really works. 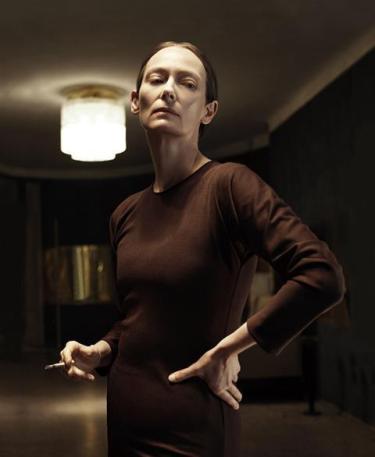 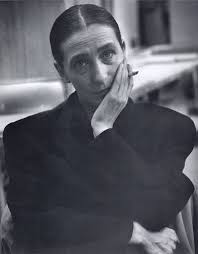 Comparing the two films has caused me to think again about a discussion I recently had with a friend on my Masters course about a Hito Steyerl concept involving the ‘poor image’ and the modern proliferation of screens. The gist was that as the technology advances and screens of all shapes and sizes form more a part of our daily lives, the quality of the image deteriorates in proportion; this has caused the slow death of cinema as it becomes just another tool for mindless capitalist production, no longer an imaginative cultural space in itself. This idea of the progress of technology over the progress of content is particularly prevalent in the two Suspirias: the remake has all the bells and whistles of modern technology, but hasn’t got the basics of atmosphere, of seduction, of emotion. Made 41 years apart, Suspiria 2018 has the technology; Suspiria 1977, with its basic special effects, minimal script and lingering shots, has the quality content.

However, I am not denouncing the 2018 version completely; I do think, with an hour cut off it and Tilda Swinton only playing one role, it is a good film in itself. When considering the two films together, it strikes me how fundamentally opposed they are despite their familial relationship: to reference one of my key concepts, Nietzsche’s theory of the Apollonian and the Dionysian as opposing forces, the balance of which is what defines true art. Suspiria of 2018 is Apollonian: rationalised, fully explained, full of light, structured; Suspiria 1977 is Dionysian, fuelled by feeling, sound, colour, chaos. Combined they would be one hell of a film; but they are so conflicted that they almost refuse to be compared as one normally would an original film and its remake, forcing instead a contemplation of their individual merits and failures, each having what the other lacks. It is unusual to have this situation with related films, for them to be mirror images of each other as opposed to building on a successful foundation for financial gain, or updating a story for the contemporary audience. Something about the new Suspiria goes so far beyond the original source material it is almost manic, which is something I respect.

Like magnets repelling each other, the two Suspiria films occupy an uneasy space in cinema, as two sides of the same coin. Peter Bradshaw of the Guardian rather bluntly calls the 2018 film more of a thesis than a remake, as it nerdily kills the unrestrained abandon of the original with its fussy contextualisation and boner-killing detail; but after some reflection, I find that the original leaves me hungry for something that the new version does offer, and I can’t fully dismiss it as a failure. Both films have their own aesthetic, their own worlds; both have moments of beauty, and they are such different perspectives of beauty that opposite appetites in the viewer have the opportunity of being satisfied.