‘Man made of blood and man made of stone, in the mud with little bits of bone.’

In December 2018 and January 2019 I realised a desire I’ve had for several years. In the Ceramics studio at Chelsea College of Arts, I made a collection of 50 objects, little hand-formed lumps of clay, that I named Giglets. The existence of the Giglets represents the fundamental link between all the narratives and subjects in my diverse projects: they represent the Ancient.

The original obsession with Giglets arose in 2013 when I visited the Pergamon and Neues Museums in Berlin, and saw a variety of what I can only describe as ancient statuettes or idols possibly representing fertility, from cultures thousands of years old that have since disappeared. I saw them and immediately had this vision of unearthing one of these figures from the sand, holding it in your hand and imagining the people who made it and for what purpose, to represent what deity or what prayer. The people who have evaporated into time leaving no trace but these little lumps with breasts and faces. 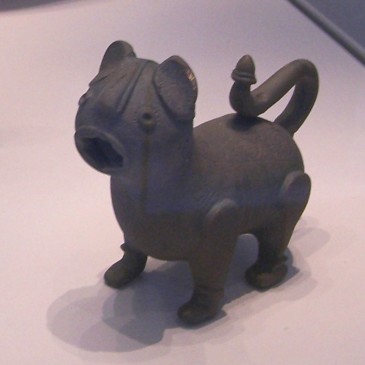 Artefacts from the Pergamon Museum, Berlin

After collecting lots of images of these mysterious museum pieces on several trips, I continued my obsession by incorporating their forms into collages and paintings, from 2014 onwards (see below for examples of collages with Giglet imagery). Fascinated with their shapes, I photographed them, printed out images of them, cut them up and glued them back together, drew them, painted them; the logical thing to do next was to make some of my own.

There is something fun about making an ‘ancient’ object. Would the new Giglets be simply replicas of the old ones or would they hold their own? What kind of skill level is needed to replicate a thousand-year-old sculpture? One of the first things I did upon starting my MA was to make 3 Giglets out of cheap air-dry clay: they ended up being very ugly and wouldn’t stand up independently. I therefore learned early on, that no matter how much I examined the images, making my own would mean allowing them to develop their own shapes and refusing to be a copy; partly also due to my lack of skill, I quickly stopped trying to sculpt the clay-lumps too much, instead allowing it to form its own natural shape, playing with how ‘finished’ to make it, and seeing if the clay could choose its own result with my hands barely impacting the process.

The Giglets replicate in process exactly the process of making the original museum artifacts. They are human or animal shapes made out of mud and fired in a kiln, where they harden and crystallise into immortality; whether they are made in 2019 AD or BC is irrelevant. Therefore the new Giglets have a direct formal relation with their ancestors, and their physical presence in my practice brings in the ideas of inherited beliefs, primitive transcendence, animism, and the loss of culture, meaning, spirituality. Where these ideas are muddled through the complicated or contemporary aesthetic of my paintings, collages or films, the presence of the Giglets roots the entire practice.

When the Giglets inhabit the same physical space as a living face, this is when the entirety of my practice comes together; this is something I hope to do for my MA show in July, where my model Lisa will act as Delphyne in an immersive cave-like environment populated by a group of Giglets. They represent another kind of life, an inherited cultural or societal memory, a belief system, an archaeological-psychic timeline that transcends individual bodies; they also represent the corruption, distortion or loss of these histories and symbols. However, the Giglets, through their very presence, suggest a life force, a desire, an instinct, a survival; they represent the libido, or the lamella (as Freud or Lacan would say), a drive for life and pleasure that transcends specific bodies, cultures, locations or histories.

The purpose of the Giglets in my work is to suggest what can be inherited and shared as a people, throughout the existence of our species over millions of years, what goes beyond language and societies into our deepest animal hive minds; what stories we keep alive and allow to grow with us.

As for the name, ‘Giglets’, this is an old obscure Scots word for ‘girl’ that I chose partly because the word suggests sex and youth without being immediately obvious to non-Scots linguists, it is also whimsical and fun to say, and it relates the ambiguous forms to the human body; but it also roots the work in my personal history as a Scottish artist and, as I’m the one making them, it’s an attempt to make a series of works that deal with a wide philosophical subject also relate to myself and my life. The Giglets to me, aesthetically, are not African or Asian like their museum counterparts may be; I don’t want them to look like they came from anywhere in particular, especially as the people who made the original objects have little in common with the people who now may inhabit the same landscape. But because I had to name them, for ease of communication, and because in naming I had a chance to relate the things back to myself and my own life, I wanted to have some fun, and call them something meaningful to me.

In On Giglets: Part 3, an upcoming post, I’ll discuss what may happen next to the little group. This will cover my creation of the Giglet Adoption Scheme, the difficulty and expense of storing past artwork, possible future implementations of the Giglets in my practice and also potential ways of destroying them.